Poplars and willows in the Waitetuna Valley

Trees of all ages and species cover Mike and Madeline Moss’s Raglan farm… helping promote the message of planting the right tree in the right place. Journalist Kate Taylor visited on an overcast winter’s day to see for herself.

The 180ha Moss farm in Waitetuna Valley Road has poplar and feijoa shelter belts, willows holding stream corners, natives in QEII blocks, red flowering gums, pines in unproductive corners and newly planted manuka helping native regeneration. “I planted the red flowering gums and it has been interesting to watch them grow. Not all of them have survived, but they are a beautiful tree and tui love them. They’re a great example of the benefits of the diversity of different trees.”

Mike and Madeline milk 120 kiwi-cross cows – once a day in summer – on their certified organic, all-grass system near Raglan. It has a herd home for winter feeding to protect the pasture. Mike says they have been organic for 20 years. “The conventional system was just not working for us or the farm. This property, with its hill country and flood plain, suits our low stocking rate. It’s a lovely area to live but it’s a difficult area to farm. The conventional system saw us pushing things fairly hard and creating lots of imbalances.” The farm also carries 60 Wiltshire breeding ewes and they rear 30 dairy beef cattle each year. Sourcing supplementary feed can be an issue for the business; they have purchased a run-off block, which is soon to be certified organic, so supply a couple of hundred bales of silage a year and carry young stock.

Kawa poplars are their go-to tree for soil conservation, land stability and shade. But in an organic operation, they also offer other benefits. Their leaves are high in zinc, when used for fodder, which is good for facial eczema prevention, and humus created by the leaf fall contributes to the mineral fertility of the soil. “The poplars’ roots take nutrients from five to six metres down and return it to the pasture in leaf fall.”

Mike has also planted kawa poplars in shelterbelts with feijoa trees (below). “The cows like them, which I discovered one day when the electric fence wasn’t switched on. But so do the birds and bees. It’s part of the cycle.” 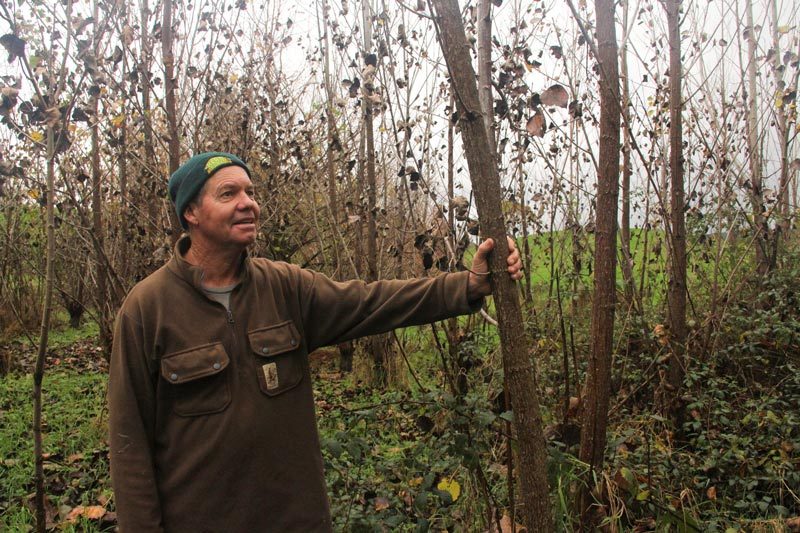 Over the years, Mike has created his own poplar nursery, which supplies his own needs as well as other local farmers.

Some years he has planted up to 100 poles, but at the moment, he’s planting 25-50. The Waikato Regional Council, through the Hill Country Erosion Fund, offers subsidies for pole planting in priority catchments. “They are being very proactive with this,” Mike says. “In some catchments, the subsidy is up to 70 per cent.”

Mike says rainfall events are getting bigger and trees play a huge part in keeping soil on the hills. “We were told 15 years ago to expect more extremes and the poplars are good for it. I’m on the West Coast Zone Committee of the Waikato Regional Council. Some farms were obliterated in storms where trees weren’t part of the picture. The more planting we can get on that hill country to hold the soil together in these events the better.”

Along the streams that cover the lower portion of the farm, Mike planted matsudana willow poles on every corner. “We did that with regional council funding and advice. The poles on the corners were to get early stabilisation while the natives kicked in. The idea was that council will come back at some stage with a view to reducing their size if need be.” 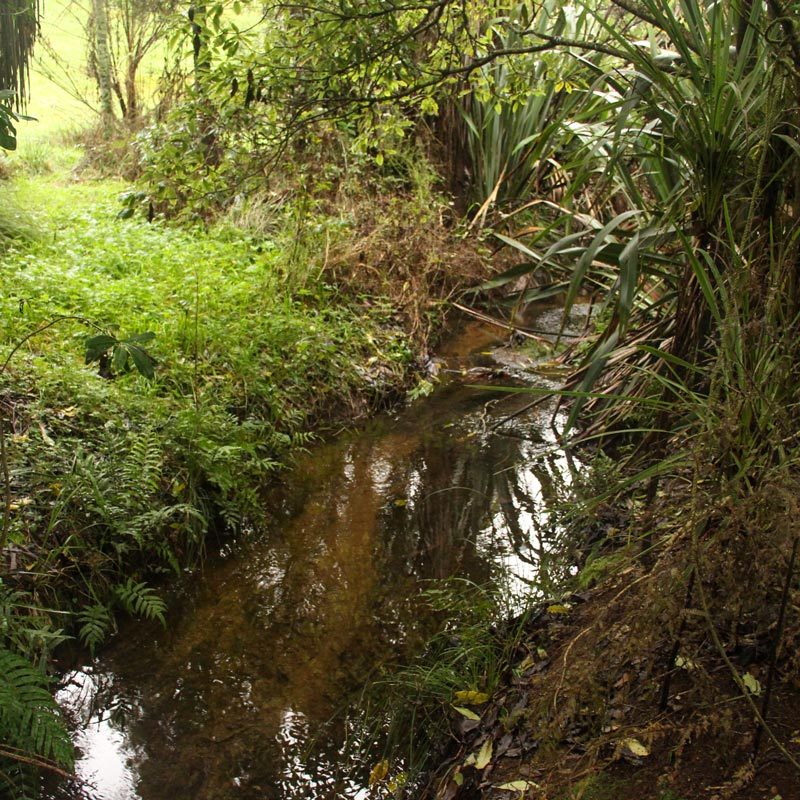 There is also a section of stream that used to be a “grotty old drain”.

Mike say planting both sides of that has made a huge difference to the quality of the water and the plentiful species within it. There is another patch where the trees haven’t grown; he uses it to show visiting groups how the weeds multiply and the water doesn’t run as clear when there are no trees. In this patch, pictured left, the fence is set well back and the trees were supplied by Whaingaroa Harbour Care more than 20 years ago.

The farm has frequent visitors, mainly tours with a company called Learning Journeys. “These groups are a captive audience and amazing to talk to. We had a group of young chefs from Hong Kong who wanted to see where their food was coming from.” The farm has also been visited by a group from Thailand that was using organic Fonterra milk powder.

The farm’s environmental footprint is always on Mike’s mind when he’s making farm decisions; for example, instead of putting a recently harvested forestry block back into pine, Mike has decided to plant manuka. “It’s too small to do anything with honey, but it will just regenerate into native. There are lots of little water ways around it. When we harvested, I decided it wasn’t a very sustainable thing to be doing.”

The farm has two 18-year-old QEII National Trust covenants - 15ha and 4ha. “Thirty years ago stock used to go in and out of there. Since we closed it off, the regrowth has been amazing. But we also have to manage pests. We’re busy trapping and shooting possums, we stay right on top of them. A guy took 300 off the property a few years ago for fur; that’s a lot of possums. Now we need to concentrate on the other pests but it’s a matter of finding the time.”

As well as diversity in their trees, the Moss family likes diversity in its income. A rental bach on the coast gives them extra on the bottom line as well as time off the farm.

“It emphasises the importance of spreading the risk.”

Mike says trees are an integral part of any farming operation and poplars and willows make up a large portion of the trees on his property.

“There were farmers who used to make fun of what we were doing, but now they’re doing it too. People who want to do it, will do it well. Then there are those who will be forced to do it. In the old days, looking back at old Country Calendars, you were a good farmer if you drained your swamp. Now you’re a good farmer if you look after your wetland. Greenhouse gas will be the next thing. We have to adapt and evolve and always treat the land with respect. This is what the public want farms to look like.”